BMI Mechanical Chief Operating Officer Dax Brott said he was genuinely excited when the Tulare-based, family-owned company won the California Family Business of the Year award given out by the Institute for Family Business. 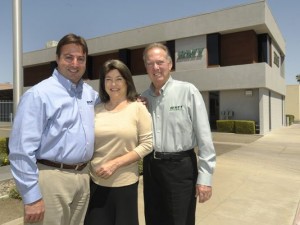 And his celebration reflected it.

“I was jumping up, I was high-fiving co-workers,” he said. “It was a celebration, a good way to reflect the work we have done.”

The company that specializes in heating, cooling and air conditioning, received the award ahead of the four other finalists. Initially, 15 companies had been nominated.

“Being nominated was an honor,” Brott said.

In selecting a winner, an independent judging panel looked at the companies’ business history, longevity, innovation, family involvement and contributions to their profession and local communities.

BMI Mechanical, in business for more than a century, focuses on heating and cooling systems for industrial and commercial facilities with customers in the San Joaquin Valley, along the Central Coast and in the northern Los Angeles basin.

Having an independent panel making the final decision added to the distinction, Brott said.

The Institute for Family Business, based in Fresno, is a cooperative group made up of businesses around the state and community and higher education leaders. Former Tulare resident Fred Ruiz is a founding member of the Institute.

After news broke about the award, Brott said he and his company received numerous congratulatory phone calls from customers, friends and family members. And yes, it’s great to get those calls.

“You feel pretty tingly,” he said.

The award will likely solidify their customers’ opinions about the company, Brott said.

“A lot of our business is built on our reputation,” he said. “It means everything to us.”

BMI Mechanical has its roots in the midwest. The company started as Brott Tin & Plumbing in Burlington, Kansas. In 1927, the company came out to Tipton to install a dry-powder milk system at a California Dairies processing, the first major job on the West Coast. The site is still in operation today.

The business later moved to California, banking on the business potential. It proved to be the right move. BMI Mechanical has installed systems in large buildings in Fresno, Madera and Tulare counties.

More than a 100 years after it was established, BMI Mechanical has its corporate headquarters in Tulare and offices in Bakersfield, Fresno, Santa Clarita and Santa Maria. The company has 26 employees in the Central Valley and five more along the Central Coast.

The company is moving forward, seeking to lower energy use for its customers, Brott said.

BMI Mechanical’s future success will continue to be linked to all its employees, Brott said. After all, he said, employees represent the company.

“It’s a great opportunity to thank employees for their efforts,” he said. “I want to say thank you to all BMI employees who got us to this point and beyond.”

77% of executives say their office workers request “the right temperature for them” most often as the best way to improve their productivity.

Since 2004, BMI has provided our company with an outstanding HVAC Preventive Maintenance Program. I must say that the ‘details’ are in place at BMI. Their technicians are courteous, on time, knowledgeable and are able to take care of any problems on their first visit.